My grandmother died of the Spanish Flu 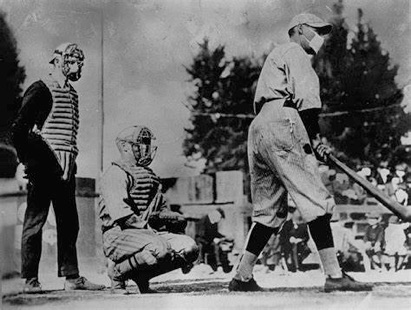 It’s quiet on the Augur Hole Road, but not as quiet as during those Hurricane Irene days when the brook across from our house was one foot above road level and racing down the valley with its flotsam of trees and twisted culverts. After the storm there was an eerie silence, no cars, no trucks, and not many people either, the only vehicles were the occasional four-wheelers or motorcycles nimble enough work around the washouts.

Now with Covid-19 there’s traffic, cars, trucks, and more people, joggers, neighbors on foot or on bikes, most of us keeping a distance. A woman parks her car and walks her dog, we chat from opposite sides of the road about where and how to shop, how long this isolation will last, how we need to invent new lives, how the old landmarks of everyday life are out the window; but at least we’re lucky to have a place to sequester—unlike so many—and that subject ends the conversation because we don’t know what to do about those less fortunate.

The virus has me thinking of my paternal grandmother, who died in Italy of the Spanish Flu pandemic three years after giving birth to my father. Consiglia Panella, née Rubano, was an American born-Italian, married to my grandpa, Vincenzo, who arrived here in 1901 at age seventeen. The 1910 ten census lists them as living in Madison, Connecticut, with one child. The couple had two more children, and at some point and for some reason, Consiglia, went back to Italy—alone—where she delivered my father in 1915. She died three years later of the pandemic.  I don’t know exactly where she died, how long she was sick, or who took care of her. My father was three years old at the time of her death and if he remembered anything he never shared it. He would emigrate four years later, in 1922, when his father and three siblings came to fetch him. His predominant memories of that one-mule town in Campania Province were being raised by a grandmother and wearing dresses because there were no boys clothes available.

What did Consiglia suffer when the flu took hold? When over fifty million people died world-wide? When public places were shut down and people wore masks and regulations were passed banning spitting? The Spanish flu was like this one, airborne, spread from person to person, infecting healthy people as well as the compromised. Victims died within hours or days after being exposed, their skin turned blue and lungs filled with fluid.

Consiglia doesn’t look sickly. In what may be a wedding photo she stands next to my grandpa wearing a full length black dress, her expression strong, even defiant – a trait that reappeared in her children. She looks like a match for my grandpa, who had his run-ins with the New York City police as a young man, the details of which I have yet to discover.

As Covid 19 took hold in this country, Consiglia’s life comes into importance as history repeats itself. And while I now want to know more about her, online research has its limits. This would be no substitute for an Italy trip, where I might find public records unavailable online, where I might visit the house where she probably died and which still belongs to our cousins, where I could absorb mood and atmosphere. Given the situation here and in Italy, it could be some time before I’m able to take that trip.

Here on the Augur Hole Road I’m thinking of the days when restrictions might be relaxed. I turn over the compost and bury clusters of worms in the garden beds I hope to plant very soon. According to the news, this second week of April will be bad—nationwide we’re already over ten thousand deaths. The neighborhood in Queens where I grew up is the epicenter of the virus in New York. Elmhurst General Hospital, a  few blocks from my house, was once an empty lot called Elmjack Field where we chose up sides to play baseball and football. The field once hosted a carnival that featured a man shot out of a cannon over a pair of giant Ferris wheels. He wore an asbestos suit and flew through the air like Superman, over the Ferris wheels and into the net. I saw this, a bead on the string of memory.

Now I try to prepare myself for the good and bad news to come, news of those in my ambit and beyond, those without homes or food or partners, those without wipes and gloves and Lysol spray. And impossible to set aside, the deficit in the nation’s leadership. So I clean the cat box and wash my hands, I drink plenty of water, I’ll take a walk or ride my bike. I’ll meet neighbors on the road, some I haven’t seen in years. We’ll share the news, who’s okay, who’s not okay, how we’re holding up. It’s quiet on the road, a quiet not unlike those Irene days. The neighbor’s horse across the field chomps away on dead grass and what little green is beginning to emerge. I take a leaf rake to the driveway and tease out the buds of day-lilies and the daffodils I planted last fall. I’m planning on a bigger garden once I get my hands on some seeds, but none of these privileges can make up for what is happening in the world, none can tell me what the world will be like once we emerge.

For now the silence, audible.