The Other Side: Growing Up Italian in America

This was the measure of his days. He sat at the window and watched the street, the single tree, the patch of garden, the two garbage pails his son Angelo would take in later. Below him people walked briskly to the subway, their heels clacking on the sidewalk. A half block away an el-train passed and vibrated the house slightly.

“Your town in Italy.”

“To see where you and Grandma were born.”

He laughed and said, “There’s nothing there!”

Later he gave me some things for his brother: twenty dollars, reading glasses, and a pair of galoshes because it snows in his part of Sicily.

His last words were, “Watch out for thieves.” 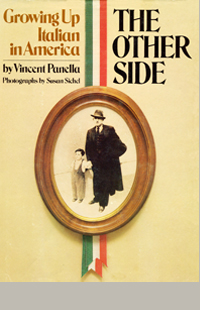