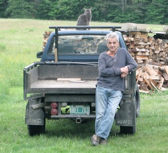 Vincent Panella is the author of the memoir The Other Side, the novel Cutter’s Island, and a short story collection called Lost Hearts

VINCENT PANELLA lives in Marlboro, Vermont and grew up in Jackson Heights, Queens where he attended Public School Sixty-Nine.

He graduated from Brooklyn Technical High School and later from Carnegie Mellon University where he earned a degree in Metallurgical Engineering. After graduation he worked as an engineer in the aerospace industry and later at a New Jersey wire company.

He served for two years in the U.S. Army during the Vietnam War years and then enrolled in graduate school at the Pennsylvania State University.  He received his Master of Arts degree in English from Penn State, and went on to the Iowa Writer’s Workshop where he studied under William Price Fox.

He worked as a news reporter for the Dubuque, Iowa Telegraph-Herald and later as the Writing Specialist at the Vermont Law school.

In 1979 Doubleday published his memoir, The Other Side, Growing up Italian in America, with photographs by his wife, Susan Sichel.

The first of his novels to be published was Cutter’s Island, (Academy Chicago, 2000) which won a ForeWord fiction award.  Lost Hearts, his story collection, is published under his own imprint, Apollo’s Bow.